What Does the Quran Say About Racism?

Although our society has grown markedly more inclusive over the past couple of decades, it remains virtually impossible to go a week without hearing about some sort of racially motivated attack or a famous figure being accused of prejudice. Unfortunately, racism has continued to be an issue worldwide in the present time as well as the past. During the time of Muhammad ﷺ, segregation was extremely common. In Mecca, where people generally identified themselves with a particular tribe, racism was a fact of life. Violence between tribes was common and only increased as Muhammad's ﷺ following grew. Muslims experienced monumental discrimination in the early days of Islam, with some being driven out of their homes for their religious beliefs. It should come as no surprise, then, that Muhammad had some pretty strong opinions about racism. Throughout his prophethood, Muhammad ﷺ encouraged his followers to be kind and courteous towards members of other tribes, races, and religions. His teachings on the importance of inclusivity can today be found in the Hadith, complementing similar sentiments in the Quran. In this article, we're going to be looking at what the Quran and Hadith have to say about racism. 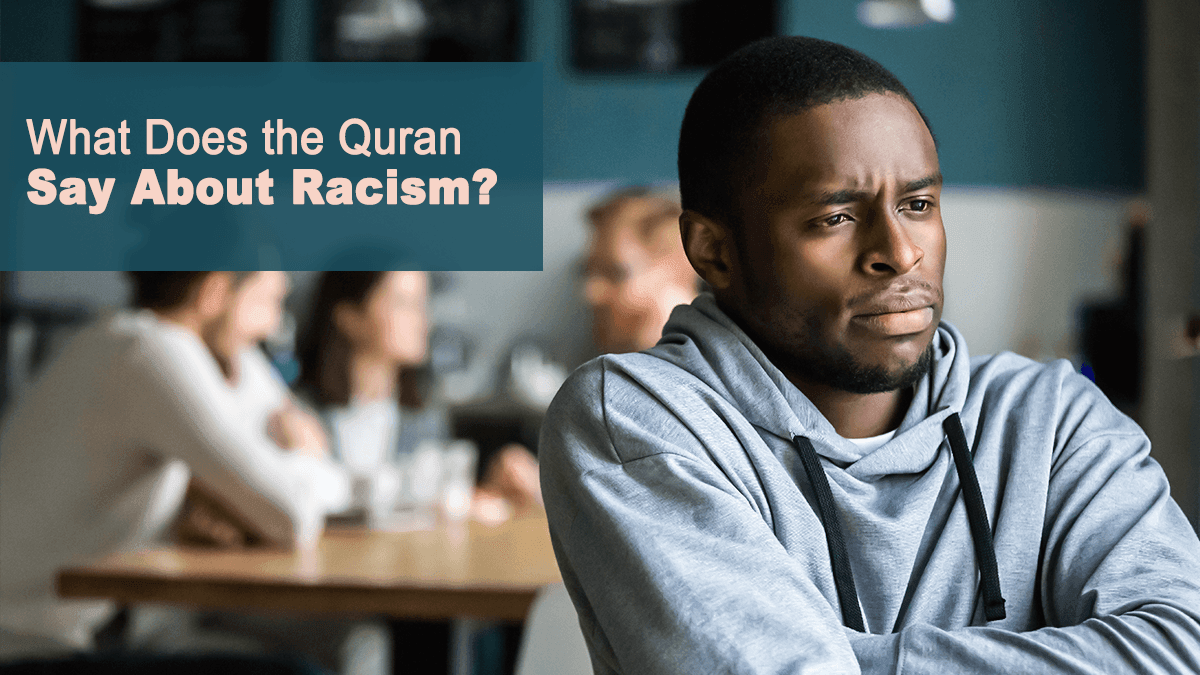 We Are All Creations of God

For thousands of years, most religions promoted a sort of "them versus us" mentality. Bar a select few, the vast majority of religions considered their adherents to be "chosen" and anybody who did not share their faith to be inferior. The same can be said when it comes to races and nationalities. It was not until the Quran was revealed to Muhammad that a religion began seriously spreading the belief that everybody is equal, even if they do not adhere to a particular set of religious beliefs. The reasoning for this can be found in the below excerpt from the Quran:

"And among His wonders is the creation of the heavens and the earth, and the diversity of your tongues and colors. For in this, behold, there are messages indeed for all who are possessed of innate knowledge!"

This passage was something of an anomaly for its time. It went in direct contrast to other religious texts, which generally taught a specific group or groups of people were the people of God. Instead, it tells us that all of mankind was created by God, with languages and races coming into existence by design. This is something to keep in mind today as gentrification and Westernization sweeps the world, almost eradicating the other tongues and cultures created by God.

The Prophet reaffirmed this teaching - with noticeable aggression - in the following Hadith:

Could it be made any clearer than that? Reading this Hadith in the present day, we can pick up a distinct feeling of urgency. Muhammad ﷺ was trying desperately to drive the message of inclusivity home to his followers, many of whom had come to think of themselves as better than non-Muslims and non-Arabs despite the Quran's teachings on race. Of course, the passage above contains valuable advice for all people, regardless of their religion or ethnicity.

We Should Embrace Cultural Differences

In the Western world, we tend to look at other cultures with a degree of suspicion. This often poses a challenge for Muslim converts, who must travel to Mecca - a city with a culture very different to that in which they were raised - to complete the Islamic pillar of Hajj. In a way, this fear of unknown cultures is understandable. After all, it is only natural for us to be wary of something - anything - with which we are unfamiliar. Plus, Middle Eastern and other non-Western countries look upon the West with equal, if not greater, suspicion. These feelings are ill-advised on both ends. Furthermore, they are in direct contradiction to the message of the Quran. Take the following passage, for example:

"Oh men! Behold, We have created you all out of a male and a female, and have made you into nations and tribes, so that you might come to know one another. Verily, the noblest of you in the sight of Allah is the one who is most deeply conscious of Him. Behold, Allah is All-Knowing, All-Aware"

In this extract, Allah again declares, in no uncertain terms, that diversity among mankind is no accident. It was created, as all things are, by design. The passage then builds on this point, discussing the importance of mingling among the tribes and races. Allah wants us not to keep our distance from those who are not like us, but rather to "come to know one another". When we explore and embrace cultural differences in this manner, we are introduced to new ideas and learn lessons upon which our own cultural can build a firmer foundation.

We Are Not Defined by the Deeds of Our Ancestors

How often do we hear a person from Britain or America declare something along the lines of "We saved the world during World War Two"? Similarly, how often do we hear a young German person being mocked or bullied because of their country's wrongdoings during the 1930s and 40s? The answer to both of these questions is far too often. While we certainly don't want to forget the terrible events of this turbulent period in human history, it is irresponsible of us to believe that somebody deserves praise or disdain based upon the deeds of their ancestors. This should be an issue of common sense. However, those who wish to make it one of religious belief will find guidance in the Hadith outlined below:

"Whoever is slow to good deeds will not be hastened by his lineage."

The above passage is important to keep in mind before you criticize others for the deeds of their forefathers. However, it is perhaps more important to keep in mind before declaring yourself superior based on the deeds of your own ancestors. According to the Prophet Muhammad ﷺ, it does not matter how many good deeds a person's parents or grandparents may have committed during their lifetime. He or she should not be content to rest on their laurels. The only way an individual can secure entrance to paradise is by committing good deeds themselves. The Prophet Muhammad ﷺ reaffirmed this in another Hadith, declaring:

"Verily, Allah has removed from you the pride of the time of ignorance with its boasting of ancestors. Verily, one is only a righteous believer or a miserable sinner. All of the people are the children of Adam, and Adam was created from dust."

Men And Women Are Equal

We understand that gender does not equate to race, nor does racism equate to sexism. However, so much has been written by anti-Islam authors accusing the Quran of sexism that we feel it would be remiss of us not to respond to such claims in this article. We will, of course, discuss the subject of gender and Islam in much greater detail in a later article. For now, however, let's take a look at this passage from the Quran:

From this extract, we can gather that Allah does not favor men over women in this life, regardless of what the critics may say. Nor will he favor men over women on the Day of Judgement. Likewise, Allah does not favor women over men now and will not favor women over men when granting admission into Paradise. In Islam, one's gender does not determine their standing in the eyes of God. Rather, they will be judged on their truthfulness, their patience, their humility, and their self-control, along with a number of additional virtues discussed in the above passage. Indeed, even the most ardent critic of Islam must admit that this extract makes it abundantly clear that the Quran - and, by extension, the Hadith - abhor sexism just as much as racism.

Steps to Guiding Your Children to Learn Quran

Ways to Make Quran Learning Fun for Your Kids

Why Do We Say Bismillah?

5 Tips For Busy People To Easily Learn Quran At Home