Click on any online ranking of the most important people in history and you're sure to find the Prophet Muhammad somewhere near the top, if he isn't listed as number one. It should come as no surprise that Muhammad is thought of so highly by historians and theologians alike. After all, he is the founder of Islam, a religion which today boasts almost 2 billion adherents worldwide. Early believers in the teachings of Muhammad made some of the most important contributions to our society, leading the fields of literature, architecture, mathematics, and more, thus furthering the influence of Muhammad across the globe. Unsurprisingly, most of what we know about the Prophet Muhammad comes from those who knew him during his prophethood. Prior to his first revelation in 610, Muhammad was living a relatively normal life, one which few people saw any need to document. But what exactly did this relatively normal life entail? We're going to be answering that question in this article and other subsequent articles. This is the first installment in a series dedicated to examining the life of the Prophet Muhammad before he was chosen as the final and greatest messenger of Allah. Let's get started! 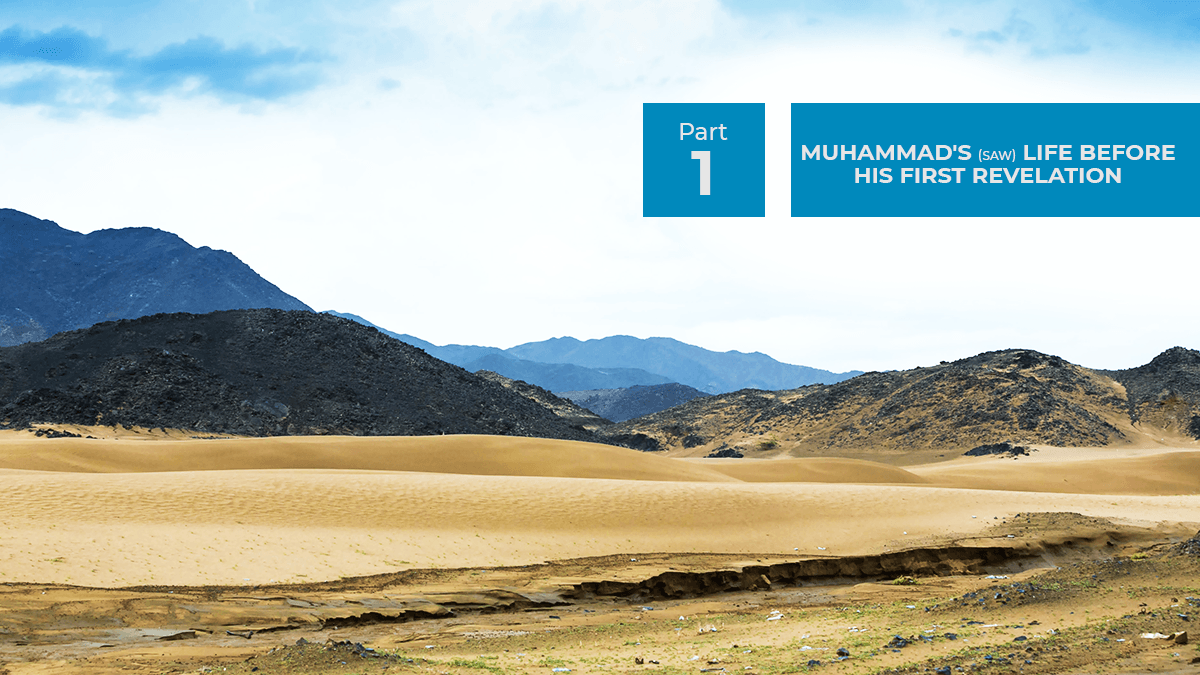 In order to fully understand the direction Muhammad's life took, it is important to examine his ancestry. Muhammad was born into the Banu Hashim clan of the Quraysh tribe. The tribe took its name from Hashim ibn Abd Manaf, the great-grandfather of the Prophet. In theory, being so closely related to arguably the most powerful figure in the history of the Banu Hashim should have given Muhammad a great deal of influence over the clan, although the circumstances which befell him in his early years seem to have prevented him claiming any sort of control (more on that later). Muhammad's grandfather, Abdul-Muttalib ibn Hashim, was the custodian of the Kaaba, which was the center of Meccan life at the time. This contributed to the power of the Banu Hashim clan. With his wife, Fatimah bint Amr, Abdul-Muttalib fathered a child, whom he named Abdullah, meaning "Servant of God". Abdullah went on to marry Aminah bint Wahb. Together, they conceived Abdullah's only son. That son was, of course, Muhammad. Tragically, while Aminah was pregnant with Muhammad, Abdullah, a caravan trader by profession, embarked on what was to become his final trading trip. Upon the completion of his business, Abdullah was preparing to return to Mecca when he fell ill. He set up camp in Medina to recuperate while the rest of the trading caravan began their homeward journey. It was there that he died and was buried at just 25 years of age, leaving behind him the leadership of the Banu Hashim clan, a pregnant wife, and a child who was to attain an unprecedented degree of glory.

There is no concrete date set for Muhammad's birth. However, Islamic tradition places the Prophet's arrival into this world around the year 570. This is known as "the Year of the Elephant" in Muslim history. Muhammad's birth occurred about six months after the death of his father. This meant his mother, Aminah, had a number of months to adjust to life as a single mother and put plans in place for the arrival of her son. These plans included handing over her newborn son to a wetnurse by the name of Halimah al-Sa'diyah.

Halimah cared for Muhammad for the first two years of his life, raising him alongside her biological children, Abdullah, Unaysa, and Hudhafa. It is around this time that a strange and mysterious event is said to have taken place. According to Halimah, she was spending time with her husband, al-Harith bin Abdul Uzza, when Abdullah suddenly appeared before them. Abdullah had been playing with the toddler Muhammad out of sight of his parents, but returned frightened and out of breath. What was more concerning still was that he returned without his foster brother. When Halimah inquired as to the whereabouts of Muhammad, Abdullah told her, "Two men dressed in white grabbed my brother and cut his chest". Halimah and al-Harith were, of course, horrified by such a story and immediately set off into the desert to find Muhammad. When they eventually tracked down Muhammad, his face was pale and his heart was racing. He told his foster parents much the same story as Abdullah had, although he was able to provide a few additional details, saying, "Two men came and opened my chest and took a portion of it".

One can only imagine how disturbing this event must have been for everybody involved. But although it certainly would have had sinister connotations in the days before Muhammad's first revelation, many contemporary Islamic scholars believe that the "two men dressed in white" may have been sent by Allah. They point not only to the association of the color white with the divine, but also to a second story about Muhammad's chest being cut open, this time during his prophethood. According to Muhammad, in preparation for the miraculous Night Journey, the angel Gabriel opened the Prophet's chest, removed his heart, and washed it by hand. Once Muhammad's heart was suitably pure for a meeting with the Creator, Gabriel returned it to his chest and stitched up the wound.

Muhammad's Returns To His Mother

As Muhammad grew from an infant into a toddler, Halimah began to consider returning him to his mother. After all, he was no longer breastfeeding, making her services as a wetnurse obsolete. It was the disturbing event discussed above which finally convinced her to end her guardianship of the young Muhammad. At the age of two, Muhammad was returned to his biological mother, Aminah. Together, mother and son attempted to start a life in Mecca. Much to their dismay, they found that the fortunes of the Banu Hashim clan were diminishing rapidly, which meant there were few resources for the widow and her young child to rely on.

When Muhammad was five or six years old, Aminah took him to Yathrib, where she had relatives outside of the Banu Hashim clan. Islamic history buffs will recognize Yathrib as the land which later became Medina. By all accounts, Muhammad's first trip to Yathrib was pleasant, with Aminah seeming in good spirits throughout their stay. Despite her apparent health, however, she fell ill and died shortly after returning to Mecca. This left Muhammad an orphan at just six years old. Too old to be returned to his wetnurse but too young to fend for himself, it seemed as though the child, not even ten years old yet, was destined for an untimely demise. However, in perhaps the earliest display of the self-discipline and dedication to Allah for which he would become famous, the young Muhammad persevered.

Muhammad As An Orphan

When Aminiah was expecting Muhammad, she turned to the Banu Hashim clan and sought help from multiple members. However, all declined to look after her future son, with most fearing they would not receive payment for their time due to the death of Aminah's husband. This situation presented itself once again following the death of Aminah herself. Now that both of Muhammad's parents had passed away, there was no possibility of receiving compensation for caring for Muhammad. To make matters worse, the finances of the Banu Hashim had fallen into disarray, leaving the clan with little means of supporting the orphaned Muhammad. It was Muhammad's grandfather, Abd al-Mutallib, who finally came forward to care for the future Prophet.

Abd al-Mutallib was known as an upright man and a dedicated believer in a single God. In fact, he is recognized by the Hadith as having received a revelation from Allah in which he was commanded to dig at a slaughter site not far from the Kaaba. He dug for three days at the site, eventually discovering the Well of Zamzam. He would go on to sell water from the well to pilgrims visiting the Kaaba, earning a modest income for the Banu Hashim clan. It seems that Muhammad's relationship with his grandfather was a positive one. It is likely that Abd al-Mutallib, through his own relationship with Allah, inspired Muhammad's interest in theological matters. It can also be safely assumed that he strengthened Muhammad's own innate monotheism through his strict belief in a single God. Unfortunately, Muhammad was thrown into mourning again at just eight years old when his grandfather passed away.

Upon the passing of Abd al-Mutallib, debate began anew as to who was going to look after the young orphan. The care of Muhammad fell upon his uncle, Abu Talib, who had also taken control of the Banu Hashim clan following Abd al-Mutallib's death. Under Abu Talib's leadership, the fortunes of the Banu Hashim clan continued to decline. Therefore, he was unable to fully care for his nephew despite his newfound power. Consequently, Muhammad was provided with little more than the food he needed to survive. Conditions would not improve for the future Prophet until he became old enough to accompany his uncle on his caravan trading expeditions.

Zakat: What is it and How much should I pay?

What Does Athan Mean In Islam?