Five Arabic Phrases You Can Use Every Day [With VIDEO]

Arabic is the national language of a staggering 26 states. This makes it the fifth most spoken language in the world. Of course, virtually all countries which speak Arabic as their primary language are located in the MiddleEast. This can make it a challenge for Muslims and native Arabic speakers living in the West to maintain a connection to the language. Similarly, Westerners who choose to study Arabic, whether it be for religious reasons or merely as a hobby, will have a hard time mastering the language because so few people in Western countries speak it on a daily basis. Thankfully, it is indeed possible to forge a long-lasting and rewarding relationship with Arabic while living in a country that does not speak it as its national language. Perhaps the most effective way of doing this is by integrating basic Arabic phrases into your everyday life. This will allow you to find an output for your knowledge of Arabic, while simultaneously introducing your friends and neighbors to the beauty of the language. In this article, we're going to be discussing five Arabic phrases that have applications in everyday situations. 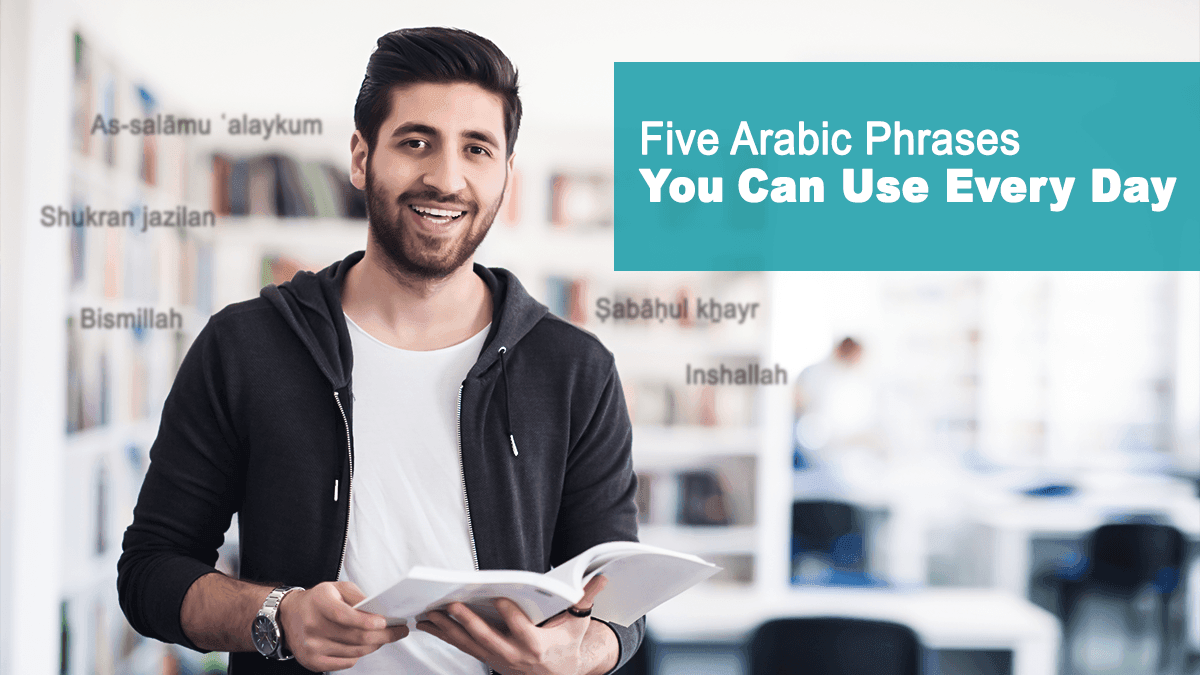 ​ "As-salāmu ʿalaykum" is perhaps the most commonly used Arabic phrase in the world. As such, many non-Arabic speakers are familiar with it. Translating to "peace be upon you", it is relied upon as a greeting throughout the Arab world. It is also used as a parting phrase, though most Westerners are familiar with it only as a salutation. Unlike many other popular Arabic phrases, "as-salāmu ʿalaykum" is used by Muslims and Christians alike. Because it transcends religious boundaries, you can use it to greet virtually everybody, with little fear of inadvertently offending someone. As you use the phrase "as-salāmu ʿalaykum" to greet co-workers, cashiers, baristas, and anybody else you encounter in your daily life, you may find that people start to greet you in the same manner. This is when you can use the phrase "wa alaykumu as-salam". The standard response to "as-salāmu ʿalaykum", "wa alaykumu as-salam" translates to "and peace be upon you, too".

​ "As-salāmu ʿalaykum" is a blanket greeting, meaning it can be used in virtually all situations. If you want to get a little more specific, however, there are a number of alternative phrases you can use to greet somebody. For example, you may want to add the phrase "ṣabāḥul kẖayr" to your daily vocabulary. Ṣabāḥul kẖayr translates to "good morning" and is the perfect way to greet your colleagues at the beginning of the working day. Similarly, you can greet your midday clients and appointments with the Arabic translation of "good afternoon", which is "masā' al-khayr". When the day has come to an end, you can, as we discussed, bid your co-workers farewell with "as-salāmu ʿalaykum". However, you could also use the phrases "laylah sa'īdah" or "tuṣbiḥ 'alā khayr", both of which are equivalent to the English "good night". When greeting somebody ahead of a night on the town, you can use "masā' al-khayr", which translates to "good evening". With these salutations and parting phrases in your Arabic arsenal, you can show off your linguistic skills literally every minute of the day.

​Native English speakers sometimes use foreign phrases in place of simply saying "thank you" in English. This is often done in jest, but it plays a valuable role in familiarizing people with the language in question. Like everybody else, you have probably thanked somebody by saying "merci beaucoup" or "gracias". These are, of course, the French and Spanish methods of saying "thank you" respectively. You may have also used other foreign languages to express your gratitude. However, people outside Arabic-speaking countries rarely use the phrase "shukran jazilan" to thank somebody. As you likely guessed, "shukran jazilan" is Arabic for "thank you very much". If you wish, you can drop the word "jazilan" to achieve the Arabic equivalent to a simple "thanks". The irony of the phrase's lack of popularity is that Arabs are famous for their hospitality and graciousness. In many Middle Eastern countries, even the most basic favor will be met with gifts and embraces and vocalisations of thanks. Our hectic Western world would undoubtedly benefit from adopting a similar appreciation for those who grace us with small acts of kindness. You can take a small step towards this by incorporating "shukran jazilan" into your everyday life.

Many Arabic words and phrases have some sort of religious connotation. Take, for example, "inshallah". "Inshallah" is one of those Arabic words that immediately captures the listener's attention. It is simple and straightforward, easy to understand and repeat. But despite its seeming plainness, it is undeniably beautiful and pours into the ear as gently as it rolls off the tongue. In English, it translates to "if God wills" or "God willing". The Prophet Muhammad encouraged his followers to use the phrase when discussing their upcoming plans as a means of reminding themselves of God's divine authority. However, it is also often used by Arabic-speaking Christians. It has even earned a place in hip hop and youth culture, particularly in Nordic countries. The phrase "mashallah" is quite similar to "inshallah" and is also worth adding to your Arabic vocabulary. Often used to express gratitude, praise, or congratulations, it translates to "God has willed it". Among religious Arabic speakers, "mashallah" is a reminder that all successes occur because God allowed them to. It can also be relied upon as a prayer for protection against jealousy and evil spirits, though this is a less common use.

Many non-Arabic speakers are familiar with the exclamation 'bismillah' because it appears in the Queen classic "Bohemian Rhapsody". In the song, the captors of Freddie Mercury's character, "a poor boy from a poor family,'' repeatedly deny his request for mercy, declaring, "Bismillah! We will not let you go!" So what exactly does "bismillah" mean? Though a single word in Arabic, it translates to the English phrase "In the name of God". It is often used by Muslims before performing basic tasks, such as eating or praying. However, it is also used by Arabic-speaking Christian as an alternative to the phrase "In the name of the Father, and of the Son, and of the Holy Spirit". As such, it transcends religious boundaries in much the same way as "as-salāmu ʿalaykum", allowing people of all faiths - and evidently non-religious rock stars - to incorporate it into their everyday life.

What Does the Quran Say About Racism?
5 Tools to Help You Learn Arabic Online