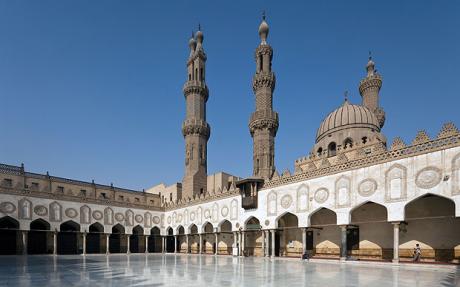 Al-Azhar University was founded in Cairo, Egypt around 970-972 by the Fatimid dynasty of Egypt, descended from Fatimah, daughter of Muhammad.  Fatimah was called Az-Zahra (the brilliant) and the university was named in her honor.  After the victory of Sultan Salahudin in his ruling over Egypt in the 12th century, Al-Azhar was reinstituted from a Shia madrasa to a Sunni madrasa.   It is the oldest degree-granting university in Egypt and possibly the world.  It is thought of as the chief center of Arabic literature and Islamic learning in the world and in 1961, it was established as a university under the government of Egypt and added non-religious subjects to its curriculum.  The University is associated with the infamous Al-Azhar Mosque in Islamic Cairo and is well-known for its Faculty of Arabic Language.

Not every student can fly over to Egypt to study at Al-Azhar.  What is the best alternative?  Study with a teacher that graduated from the university!  All of the Arabic teachers of Studio Arabiya have graduated with higher education degrees in the Arabic Language - many of them being from Al-Azhar University.

To start learning Arabic with one of our specialized Arabic teachers, enroll today!