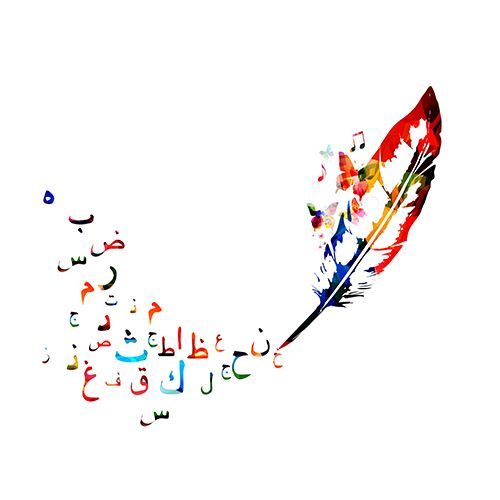 One of the many neat things a student of Arabic will first learn about the language is that many of its words can be traced back to a triliteral root.  This means that there are usually three base letters from which different words emanate and are derived.  The words that share these letters may have different meanings, but they are connected ‘at the root’, and therefore have relationships and a certain correlation with each other.  These connections add a really incredible dimension to words, allowing for layers and shades in meaning that can be brought in and understood from the varying words that share the same base.

For example, the words Islam, Muslim (one who follows the religion of Islam), salaam (peace), tasleem (submission), silm (peace treaty), and salamah (well-being and wholeness) all come from the same three-letter root (سلم sa-li-ma).  While one may translate ‘Muslim’ simply as one who follows the religion of Islam, it has linguistic connections with these other words that give it the connotation of peace, submission, wholeness, and so on.  Similarly, the word we commonly translate as faith (إيمان iman) is connected to the words to trust, to be secure, to be in safety, and covenant and pledge, that are all naturally connoted in the Arabic word iman.

Some other interesting examples:

◊ The word for a mother’s womb (رحم rahim) is connected to the word for loving mercy (رحمة rahma).

◊ The word for beauty and perfection (إحسان ihsan) is connected to the word for a good deed, and the reward of a goodly deed (حسنة hasana).

◊ The word for a righteous person (صالح salih) is related to words that mean to make amends, to rebuild or reconstruct, to bring together and to be a peacemaker.

◊ The word for God-consciousness (تقوى taqwa) is related to the word for a shield or protection (وقاية wiqaya), perhaps indicating that remembrance of God can be a spiritual shield for a person, protecting them from harm.

◊ A really interesting example is in the connection between the word for human being (إنسان insaan) and the root أنس aa-ni-sa, which refers to familiarity, companionship and being on close or intimate terms with another.  This emphasizes the innately social nature of human beings and our desire to have familiarity and companionship with others, and on a more spiritual level, an innate desire for closeness with the Divine.

Some linguists alternatively trace the word insaan back to the verb that means ‘to forget’ (from the trilateral root نسي na-si-ya), which suggests that it is an innate part of human nature to forget and to sometimes make mistakes.[1]

In studying the trilateral etymology of Arabic, one can really find many beautiful meanings and lessons in the connections between words.  In the same way meeting someone’s family can help you understand a person more fully and their nature and personality, getting to know an Arabic word’s ‘family’ can help you discover new dimensions and depths to their meaning.

Stay tuned for upcoming posts, in which I’ll explain why Arabic is the ideal language for poets and lovers. :)

[1] The latter opinion has been attributed to Ibn Abbas in many works of Quranic exegeses, while the former seems to be the opinion of the authors of Lisan al-‘Arab and Qamus al-Muheet as well as others. (See Lisan al-‘Arab under the entry for “أنس”)
Tags:
shazialearning arabicarabic languagearabic
Learning Arabic Takes Time
My Learning Adventure to Learn Arabic Language!

Interview with Yelda, a Winter-Intensive Student

You make language so interesting and I love the way you delve into the origins of words! Awesome!

0CancelReply
You make language so interesting and I love the way you delve into the origins of words! Awesome!
CancelUpdate Comment

What a great post! I love how interconnected the words are. Reminds me of studying the different languages in high school.

0CancelReply
What a great post! I love how interconnected the words are. Reminds me of studying the different languages in high school.
CancelUpdate Comment

This is so interesting! I never mastered another language and I wish that I could!

0CancelReply
This is so interesting! I never mastered another language and I wish that I could!
CancelUpdate Comment

Thanks for the breakdown. I've never really tried understanding foreign languages so it's hard to grasp but you made it fairly simple.

0CancelReply
Thanks for the breakdown. I've never really tried understanding foreign languages so it's hard to grasp but you made it fairly simple.
CancelUpdate Comment

Digging deep into other languages is so fascinating. Thanks for sharing your insight.

0CancelReply
Digging deep into other languages is so fascinating. Thanks for sharing your insight.
CancelUpdate Comment

[...] we discussed in an earlier post, Arabic words often have a family of related and root words that give an amazing breadth and [...]

0CancelReply
[...] we discussed in an earlier post, Arabic words often have a family of related and root words that give an amazing breadth and [...]
CancelUpdate Comment

10 Ways to Help You Memorize Quran This Year
What Does the Quran Say About Racism?
Al-Du`a Al-Mustajab: 24 Ways to an Accepted Supplication
7 Mind-Blowing Scientific Facts Mentioned In The Quran
5 Easy and Fun Decorating Ideas for Ramadan