One of the most beautiful Ramadan duas (supplications) we are taught by the Prophet (peace and blessings be upon him) is the following: 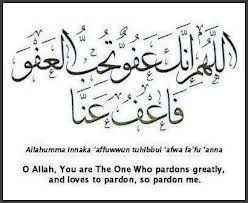 O Allah, indeed You are the Pardoner, You love to Pardon, so Pardon us.

The uniqueness of the name of Allah al-`Afuww (The Pardoner), and how it relates to some of His other names of forgiveness (like al-Ghafoor, the One Who Forgives) is described in the following passage, excerpted from an article on Tayyibaat.

Al ‘Afuww comes from the root ‘afw which  means to hide, obliterate and to remove something. From this meaning comes ‘pardoning’, when one looks over a person’s error and does not take them to account for it. From a technical perspective it means the protection of Allah ta’ala for the Believers from the trials and from sickness (i.e.,aafiyah, safety and well-being).

Difference between ‘Afuww and Ghafoor

On the Day of Judgment, we may find that many sins we committed are not in our record, this is ‘afw; Allah completely removes your sins from your record as if you never committed them. When it comes to ‘afw, Allah ta’ala says:

Al ‘Afuww pardons His Servants by not calling them to account for their sins and erasing their sins from their records. Not only does Allah pardon and remove our sins, He subhahanhu wa ta’ala loves to Pardon as we are taught to say in the duaa.

Imam Al-Qurtubi indicates that this quality is also indicative of Allah being easy on His creation. Shaykh ibn Uthaymeen rahimahullah states, “Al ‘Afuww is the One who has always been and always will be known for His Pardoning. He effaces the sins of His slaves, relinquishing the punishment of the deserving thereof.”

What a beautiful supplication to mention repeatedly throughout this month, a month of grace, pardon and blessings.  May He make us of those whom He Pardons, Ameen!